Ed Morales '08: from history and law to life as a successful film editor 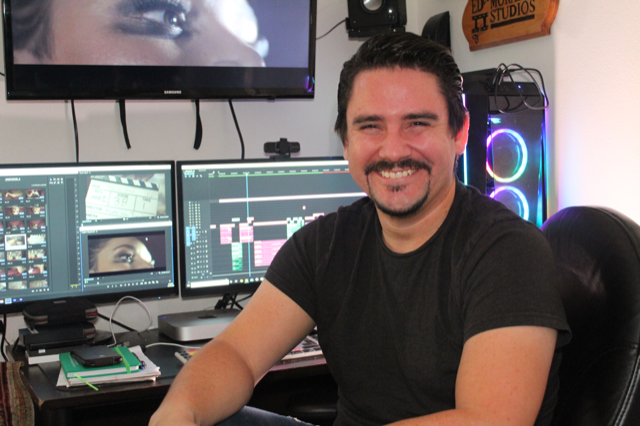 When Mr. Bunce contacted me to write a feature for the VPS alumni spotlight, I was very ﬂattered. And then nervous. And then both of those feelings disappeared once I realized I hadn’t actually escaped high school English class - I had just taken a twelve year break. Fifteen hundred words due next week? Welcome back.

All kidding aside, I was deeply honored to be invited to share my story. I graduated from Villanova in June 2008, with the vague notion that I wanted to study history and end up practicing law. But life, as it usually does, had other plans for me. I’m now a trailer and TV editor in Los Angeles, and I can say that I genuinely enjoy my work. How did I get from pursuing history and law to something like editing ﬁlm? I ask myself the same question every day. Kidding. It’s my hope that this brief biography can provide a roadmap of sorts for anyone considering a career in ﬁlm or the entertainment industry in general. As anyone who has begun a career in this business can tell you, getting started is incredibly daunting.

Before we get too far, a little bit about me. As I mentioned earlier, I am a trailer and TV editor. For anyone that remembers the videos I used to make instead of the oral presentations in class, I’m sure my career path is rather less than surprising. I’ve worked on a large variety of movies: Marvel, DC, drama, horror, comedy - the list goes on. I’ve collaborated closely with ﬁlmmakers and actors. Recently, I cut several spots for the marketing campaign of Netﬂix’s “Stranger Things 3”, for which I won a silver Clio Award, which is sort of like the Oscars for the trailer and TV business. Concurrently, I’ve worked on several short ﬁlms that have screened all over the world, including at the Cannes Film Festival and the Chinese Theater in Hollywood.

If I had to pinpoint a moment where this journey started, it would be at Villanova, in my ﬁrst or second year. On a whim, I took Ms. Williams’ “Art of Film”, largely because I had never seen a class that was purely about movies and I was drawn to the novelty. I had no idea that it would change the course of my life. Before that class, I had never considered movies something to analyze and discuss. By the time the year was over, I was completely hooked. I was making movies and reading about movies with the voracity of a starving person that had just arrived at a buﬀet. One ﬁlm I made at Villanova that is, unfortunately, indelibly imprinted in my memory was a 20-minute parody of 1979’s Rocky. Except instead of a boxer, the main character was a down on his luck sprinter. We re-reacted the iconic scene where Sylvester Stallone charges up the stairs triumphantly on the staircase from the parking lot near the track. Instead of “Rocky” the ﬁlm was called “Dusty”, in reference to the yet-unpaved track.

That same year, I joined Mr. Bunce’s Film Club, where I was exposed to the shocking depths of B-movies. The titles speak volumes: “They Saved Hitler’s Brain”, “Plan 9 From Outer Space”, and so on. Even as absurd as some of these movies were, I learned from them - and not just “how not to make a movie”. To this day, I still enjoy watching, and learning from, B-movies and fondly remember Friday afternoons in Film Club. Most recently I watched Ishiro Honda’s 1963 ﬁlm “Attack of the Mushroom People.” Wonderful.

Interestingly, though, as I graduated Villanova and prepared for the next step of my education, I still wasn’t able to see ﬁlm as a career, as I mentioned earlier. And as such, I entered Occidental College still set on ﬁnding my way into law by way of a degree in history. And so I took the requisite history classes and wrote the requisite essays. I enjoyed it. But that same bug that had driven me to Ms. Williams’ Art of Film class kept nagging at me. It wouldn’t leave me alone, so I ﬁnally signed up for an introductory ﬁlm production class. As I started the class, the same boundless enthusiasm returned and I found myself going above and beyond the scope of the assignments in class. After the class concluded, I enrolled in another and another. The classes were so much fun that it felt like I was somehow cheating the system. It was almost like I had found a loophole and my classes were suddenly transformed from soul-crushing research papers to making movies - something I could spend hours doing and be completely oblivious to the passage of time.

One night walking back to my dorm room after working into the small hours of the morning, I understood why I had never considered ﬁlm and making movies as a career - it was fun. And work was supposed to be, well, work. This epiphany led me to another: my interest in my history studies was piqued by the act of storytelling, the essence of editing ﬁlm. I was most interested in the primary sources, the stories from the people that had witnessed history unfolding in front of them. In short, while history did not become the career path that I chose, it helped me to understand the path that I did choose.

As this realization had happened rather late in my college years, I continued my trajectory towards a major in history, but I added a minor in ﬁlm production. Because I felt like there was still much to learn, I decided to continue to a graduate program in ﬁlm production and found my way to Loyola Marymount University’s School of Film and Television.

Graduate school was exactly what I had hoped it would be - nothing but making movies, talking about movies, dissecting movies. On a more practical level, it gave me exposure to real world job experience - I was on sets every weekend for nearly three years. It was at Loyola that I took my ﬁrst class focused on editing. I couldn’t believe that the assignments counted as class work - they felt like something I would do in my spare time. Perhaps most importantly, however, graduate school blurred the line between classroom and work. I had several internships where I was exposed to the front lines of development, production and post-production. This was extremely helpful for me because it served to “demystify” the world of professional ﬁlm production. It was no longer something unattainable, but something very real.

When I graduated in 2015, I applied to probably 200 jobs. I heard back from one. Even for a well-educated and well-prepared candidate, the job market was tough. For anyone reading this and going through the same experience, keep at it. Even though I had extensive schooling, the only job I could get was as a runner/production assistant. I was getting coﬀee, lunches, dinners and any other odds errands that got passed down to me. Once, I delivered a cake in the shape of an actor’s musclebound torso to celebrate the release of a movie with the same musclebound actor. No business like show business, right?

The important part of this, however, was that I met people and developed relationships. I quickly became friends with a producer and she helped me to start cutting TV spots. The ﬁrst campaign I worked on was 2015 movie, “San Andreas”, a Dwayne Johnson movie. Because I was still a runner I had to edit on my own time. I remember when I worked nights, the only time I could edit was after my shift ended at 2am. I used to drive home with the morning traﬃc with a huge smile on my face. It was just like when I discovered ﬁlm classes for the ﬁrst time at Villanova.

As I continued to reﬁne my skills, I moved to larger projects. I cut trailers and TV spots for “Moana”, “Coco”, “Incredibles 2”, “Wonder Woman”, several “Star Wars” movies, the ABC Super Sign in Times Square, and countless others. I slowly became more involved with Netﬂix content and began cutting spots for “Stranger Things 3”. One of these spots won a silver Clio Award this past at the ceremony this past November in the Dolby Theater.

To wrap things up, the best lesson I can oﬀer is to go where you heart takes you, and to put the work in. The late nights that turned into early mornings were so much fun. At the same time, however, I couldn’t have done that working on something that I didn’t love. Looking back, it’s incredible to me that this journey started because a shy Villanova freshman took a chance and walked into a class he knew nothing about.

You are commenting as Anonymous