Each year the Clare Boothe Luce Scholar Program at Villanova visits either Santa Clara University (which is one of twelve universities in the country that receives funding from the Henry Luce Foundation) or the Catalina Marine Institute. This year, over twenty female students in the Clare Boothe Luce (CBL) program spent two days learning about science, math, and engineering during their trip to Santa Clara University. 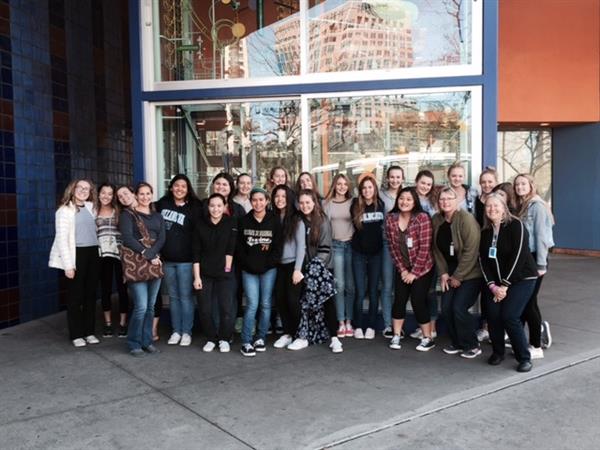 While there, the students visited and worked in the School of Engineering's Maker Lab. This was a major highlight for them because not only were they able to observe and learn about the equipment in the lab, but they were also able to have a hands-on experience and work with the tools. Samantha '17 expanded on her time in the lab, “Being able to work with the equipment is something I really enjoyed. We were able to use 3-D printers and scanners to create our own 3-D models. That is something that I've never done before and the experience helped me understand more about the 3-D process.” On top of creating 3-D models, the girls also participated in an experiment where they split into groups and constructed a marshmallow tower in less than eighteen minutes.

Learning more about math and science was the main objective of the trip; however, another benefit of the two-day trip was the camaraderie built among the female students in the program. Emmalee '18 reinforced this point, “I enjoy the CBL trips because I get to know my classmates better. Sometimes I don’t have the chance to see many of the girls outside of school, so to spend two days together and have fun, while at the same time learn about topics that interest all of us is always a lot of fun.” On top of building unity among the group of females on the trip, AnAn Che '13 and Kelly Cox Gonzalez '12, two former CBL participants and Villanova alumnae who are now studying science at Santa Clara University, also joined the girls to show them around campus and share their experiences.

The unity and hands-on experience the young ladies received at Santa Clara University reinforced the important role the Clare Boothe Luce Scholar Program plays at Villanova. Whether it was working in the Maker Lab, touring campus with current female engineering students, or bonding over the two-day trip, the goal remained the same: introduce and encourage young women to learn more about science, math, and engineering with the hope that they will further explore these fields in college.